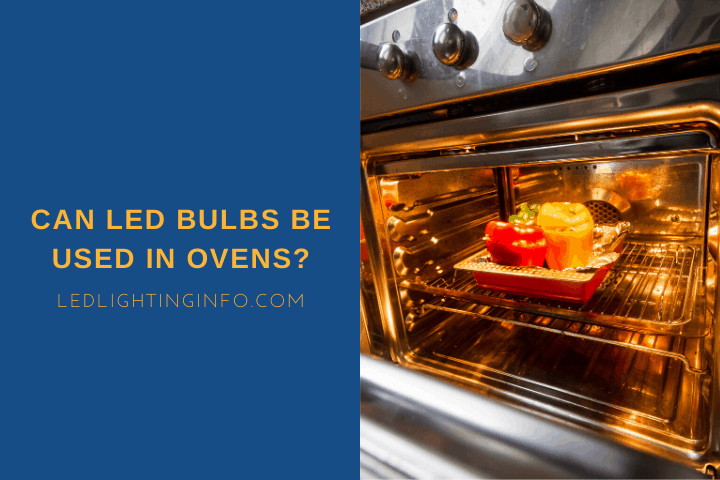 While replacing your fixture and home lights with an LED is more or less straightforward and almost always the better option to go with when it comes to appliances. In this case, gas or electric ovens, an LED is not going to work.

The ideal bulb to use in ovens is the traditional halogen or incandescent bulb, which is suited for sustained high temperatures and made of thick glass to protect the filament and be shatterproof.

Going one step ahead, If you’ve ever tried, or been curious about the self-care button on the oven, it is meant to take the internal temperature around 800F (~425 C).

This high heat function literally burns any food residue stuck inside the oven. It turns it into ash, which you can simply flick off with a poof.

Now in this extra hot environment, imagine a tiny little computer made of microprocessors and semiconductors, covered in a plastic body.

Because that is what an LED bulb essentially is. The LED will simply melt in this excessive heat.

Keep in mind that LEDs are closer to being a computer than lighting technology. So they love being kept cool while on and give optimum performance when the heat is carried away from the sensitive circuitry inside an LED bulb.

The bulbs lose light output with increasing junction temperature. Anything too high, and the body will start melting.

So subjecting these fragile electronics is not going to work out.

Can LED Bulb Work In The Oven?

Are you still curious to find out if LED bulbs can actually work inside ovens? Well, to satiate your curiosity, many people have tried to check what happens, or just didn’t know any better.

To cut to the chase, and if you haven’t guessed it already, well…an LED bulb will melt in the oven if the oven is heated up. Take a look:

By the way, if you have come across a melted bulb, it’s important to immediately discard it. And the chances are that some toxic gases from the burnt plastics and other components would have permeated the food in the oven, so it is best to discard it!

To take the caution one step further, it is also possible that the melted bulb’s exposed circuitry or some other part may catch fire in the hot oven, so please don’t try to test it out.

And as the last straw on the camel’s back, you will most likely end up damaging your oven’s light socket and will be stuck in an even tighter spot than before!

What Bulbs Should Be Used As Oven Light?

So now what? Your oven light has stopped working, your stock of LED bulbs isn’t much help here, what is your alternative?

In this case, the traditional incandescent bulb is the answer. These special bulbs are called appliance-rated.

They are different from regular incandescent bulbs in that they are designed to stay on even if the bulb is exposed to high temperatures for a long time.

Additionally, they are shatterproof in case of a hot liquid touches it.

As with any bulb, you should check the three basic things before buying the new bulb:

Another thing to note is that the bulb is usually protected by a screwed in cover. So your new replacement bulb must be the right size to fit inside the cover.

If you remember how an incandescent bulb works, you can understand how the heat from the oven actually works as efficiency increasing factor, as the bulb does not consume extra power to heat itself up to produce light. It is already hot from the oven.

You can have a look at this video explaining how to take off the oven door and replace the bulb easily.

Is It Safe To Use an Oven With No Light?

Considering your old bulb stopped working and you haven’t had the time to order a new one, perhaps you can still use the oven in the meantime with an empty socket?

Without a light in the oven, opening and closing the oven door to check if the food is done will ruin your dish.

Apart from being completely unable to see how brown the top of your cheese casserole has become, you are also making a safety mistake.

So the answer is no. You cannot use the oven without a plugged in the bulb in the socket. Even if you leave your old non-working bulb in there, that will be fine, as long as the socket is not empty.

There are two reasons for this:

A final thing to keep in mind for added safety is to always switch off the main power supply to the appliance, or unplug it.

Some models may trip or behave unexpectedly, and short the control panel or the oven.

Better safe than sorry, especially with dangerous work like electrical jobs. Not to mention the very high cost of replacing the oven’s motherboard and hiring a technician.

Also read: Can You Use LED Light Bulb In The Microwave?

So as you read above, in the case of an oven, an incandescent or halogen is your best friend, so save those LEDs for another place.

Have you burned out your oven bulb?

Did you run into any problems like unplugging the bulb or not getting the correct size?

1 thought on “Can LED Bulbs Be Used In Ovens?”