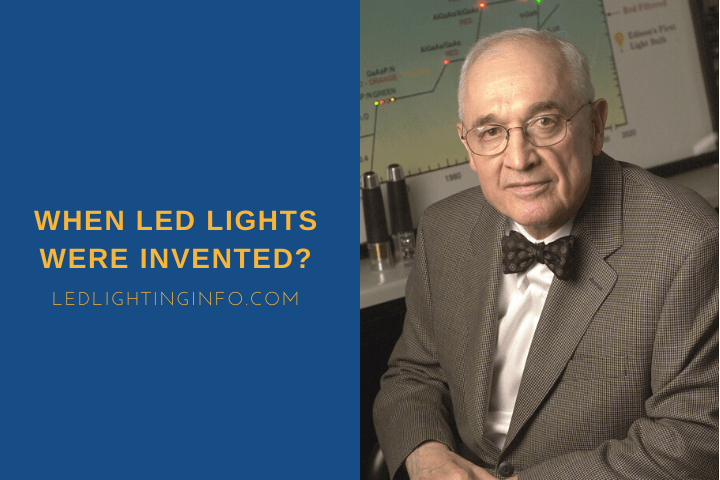 Have you ever heard of the phrase ‘there’s always room for improvement’? Well, this applies to the development of LEDs more than you think.

Due to their surge in popularity in the 21st century, most people assume that light-emitting diodes are a recent innovation. But this isn’t strictly true, the technology has been years in the making.

Electroluminescence, the principle behind LEDs, was first discovered in 1907 by Henry Joseph Round. But it wasn’t until 1962 that engineer Nick Holonyak used the science to create visible LEDs as we know them today.

From street lights and calculators to TV remotes and traffic signals, nowadays, LEDs are all around. But the journey to this point wasn’t always linear.

Let’s travel back to the early 1900s and explore the complete history of LEDs – who invented them and how did they become so popular? Keep reading to find out. 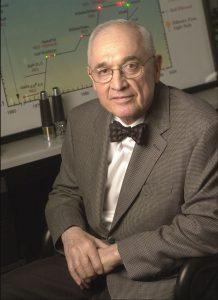 The development of LEDs is best thought of as a collective effort. Over the last decade, several individuals have contributed to the science that drives modern LEDs. Most notably, Nick Holonyak.

Nick grew up in the small town of Zeigler, Illinois, and developed a love for engineering after spending his childhood working on his father’s Ford Model T. This coaxed Nick to pursue electrical engineering as a career. So he went on to achieve a bachelor’s and master’s degree plus a doctorate from The University of Illinois.

In 1957 after graduating, Nick found employment at General Electric, the company behind fluorescent and halogen bulbs.

Holonyak’s big breakthrough came in 1962 when he was tasked with creating an infrared laser. During his experimentation with gallium arsenide phosphide (GaAsP), Nick accidentally created a red LED.

Though other scientists had been investigating electroluminescence for years, Nick’s LED was the first to emit light in the visible light spectrum. In other words, it was the first to produce light that humans could see.

Holonyak nicknamed the LED “The magic one, GaAsP,” and within a year, General Electrics were selling them for $260 a bulb. Speaking to Wired in 2012 about his invention, Nick said:

[su_quote]An editor from Reader’s Digest […] pointed at the fact that LEDs will eventually cover the whole spectrum and be the source of white light. And that’s what happened. But I thought it would happen much quicker than 50 years.[/su_quote]

When Was LED Invented?

Thanks to Nick Holonyak, the first visible-light LED came about in 1962. But it wasn’t a random invention, so where does the science behind LEDs stem from?

Back in 1907, British scientist Henry Joseph Round discovered the phenomena of electroluminescence. He noticed that when you apply 10 volts of electric current to a silicon carbide crystal, it emits light. This happens because positively charged electrons meet with negatively charged electron holes, causing a reaction.

The discovery was ground-breaking, but unfortunately, the yellow light that Henry created was too dim to be of any real use.

Scientists continued to study electroluminescence throughout the first half of the 20th century. The term was officially coined by George Destriau in 1936.

The potential of electroluminescence was first noted by a Russian researcher, Oleg Vladimirovich Losev. After observing light emission from zinc oxide and silicon carbide, Losev published a series of papers between 1924 and 1930 that outlined the LED and its possible applications.

[su_quote]The proposed invention uses the known phenomenon of luminescence […] and the use of such a detector in an optical relay for the purpose of fast telegraphic and telephone communication, transmission of images.[/su_quote]

I’m sure you’ll agree that Losev was ahead of his time!

How Did LED Light Become Popular?

I know what you’re thinking: if the first LED was created in 1962, why didn’t they become popular until the mid-2000s? It all comes down to money.

When General Electrics started selling red LEDs in 1963, they retailed at $200 per bulb. This was extortionate compared to the $5 – $20 that people were used to paying for incandescent and fluorescent bulbs. Plus, they weren’t available in white!

So initially, it was difficult to break into the market. People were happy with the lighting they had and weren’t willing to gamble hundreds of dollars on something new.

By the mid-1970s, Fairchild Optoelectronics created a LED that cost just 5 cents to produce. But due to the small size of the production batches, the cost to consumers was still extremely high.

Over time as huge businesses such as IBM and HP started using LEDs, LEDs began to market themselves.

As demand increased, so did production volumes. Mass production allowed manufacturers to enjoy economies of scale in which the cost per unit fell drastically.

Nowadays, LEDs are available for as little as $3.

1907: Henry Joseph Round is the first person to report light emission when electricity is applied to silicon carbide.

1961: Robert Biard and Gary Pittman produced and patented the first infrared LED. Its light was beyond the spectrum of light that is visible to humans.

1972: M. George Craford created the first yellow-colored LED using one red and one green chip. He also created red and orange LEDs that were 10 times brighter than Holonyak’s version.

1996: Shimizy files a patent for a planar white light source based on a blue, red, and green LED for RGB white backlighting in full-color displays.

2007: U.S. pledges to phase out incandescent bulbs and replace them with LEDs.

2010: DesignLights Consortium release a set of standards that all LEDs must meet.

2011: Phillips won the L-Prize for their LED equivalent to a 60w incandescent bulb.

2012: More than 49 million LEDs were being used across the U.S, resulting in energy savings of $675 million.

It’s been a long and turbulent journey, but finally, LEDs are everywhere. There’s probably at least one LED in the room you’re sitting in right now. Or maybe the device you’re reading on has an LED screen!

In any case, scientists seem to agree that LEDs have a lot more to give. According to Nick Holonyak:

[su_quote]It’s in its infancy in the sense that it can go a long, long way further. […] We’re still searching for better ways of making the crystals, doing the chemistry, getting everything right.[/su_quote]

2 thoughts on “When LED Lights Were Invented? A Brief History Of LED Lighting”

Find The Light On Your Path

Scroll back to top
0shares